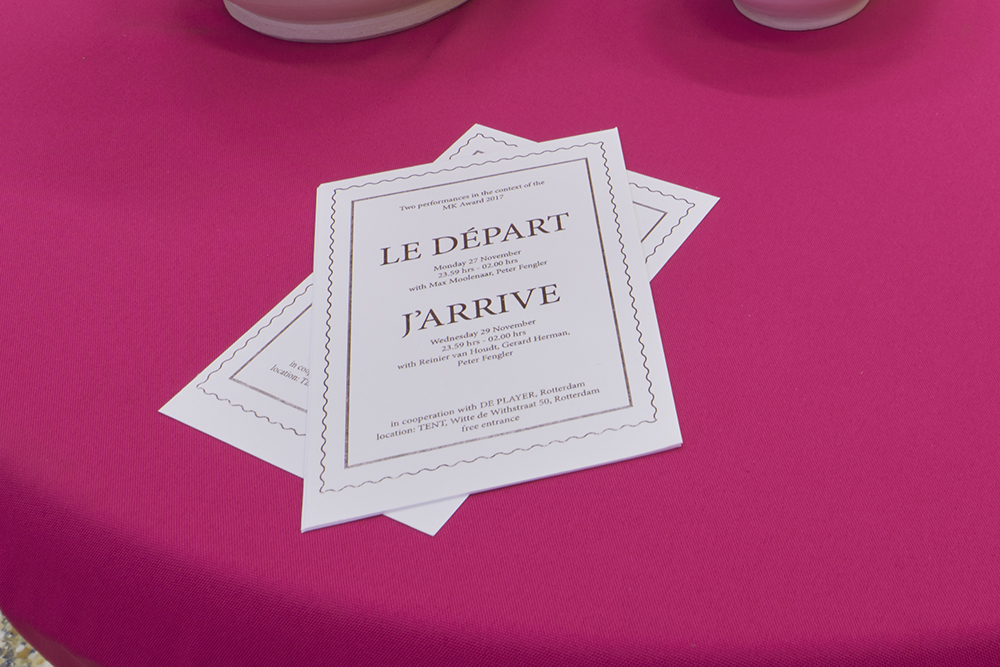 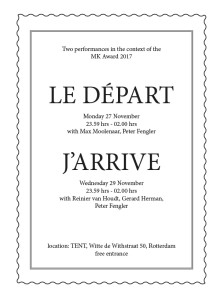 DE PLAYER its artistic director, co-founder and production slave Peter Fengler is nominated for the MK Award 2017. Recently the exhibition of the shortlist opened in TENT, Rotterdam. As part of Fengler’s installation ‘Nasi Kip Met Glas’ we present two nightly performances at TENT that explore notions of time and place. The performances have a strong connection to Fengler his performative oeuvre and are similar in spirit to previous DE PLAYER productions such as the ‘Stromboli’ and ‘Baroque Non Baroque’ series and the remarkable nightclub events of the early years.

MAX MOOLENAAR (nl)
Guerrilla-style artist and actor who is sometimes mistaken for a charlatan. Too stubborn to be working at a circus he has directed and domesticated himself, developing a phenomenom that can be filed under ‘non-stop theatre’. His theatreplays, (short)films and tv productions are anarchistic in approach. At this event he’ll have some magic tricks up his sleeve as well as philosophical views on artistic matters and mechanisms.
maxmoolenaar.com

GERARD HERMAN (be)
Gerard Herman has entertained Roffa with remarkable performative actions before. He explores the outlines of what could be called a ‘work’. He connects with the artistic heritage of a variety of mindsets such as dadaism. His first detailed exhibition entitled “Arm en erg hard” (an anagram of his own name) took place at the M – Museum in Leuven, at age 24.
Herman’s conceptual bicycle tours were part of this exhibition. “Uit een Belgisch dal klimmen” for example followed the lowest point in Belgium (the sea) towards the highest (Signaal van Botrange). This timebased activity and performative mapping tool will play a key role for this event.
www.gerardherman.be

REINIER VAN HOUDT (nl)
Acclaimed pianist who performs rather extreme avant garde pieces, will perform Peter Fengler’s “3 Etudes suicidaire” – an experimental graphic score. Van Houdt’s perspective on his profession: “more and more music escapes the grasp of the composer, the musician and the listener. The notion of music perceived as ‘a genius’ creation’, an ‘artisanal product’ (manufactured according to a certain tradition) or as an experience that is exchangeable within a market, is coming to an end. Music seems more like a natural phenomenon or a ghostlike apparition, brought about by experiments or certain states of mind. Heavily distorted or barely audible – a hiss, almost; an essential unreliability, that nevertheless determines its vitality…”
www.reiniervanhoudt.nl